I am trying to prove my theory that Christopher Townsend of Hanover, Jackson County, Michigan was the third child, second son of Darius Townsend and Abigail Paddock of Conquest, Cayuga County, New York.

Christopher was born circa 1809 in New York. In October 1833, Darius sold part of his land in Conquest, Cayuga County to Christopher. He also sold most of the rest of his land to his known first born son William Townsend. In 1834, Darius died.

In 1850, he is in Camillus, Onondaga County, New York with his wife and children: Allen, Phebe A., Susan, Adeline and Mary.

In 1860, he is in Hanover, Jackson County, Michigan with his wife and children: Susan, Adeline, Mary, Henry, and Elizabeth. Henry is 8 and was born in Michigan, placing Christopher in Michigan circa 1852.

Christopher died in 1862 and is buried in Hanover Cemetery, Hanover, Jackson County, Michigan.

Maranda then married Michael Donovan but is also buried in Hanover Cemetery.

I have found the following death records for his children: 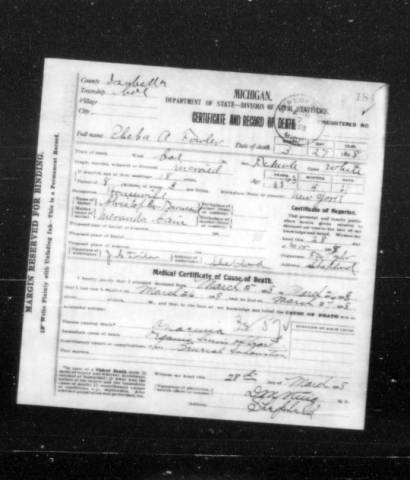 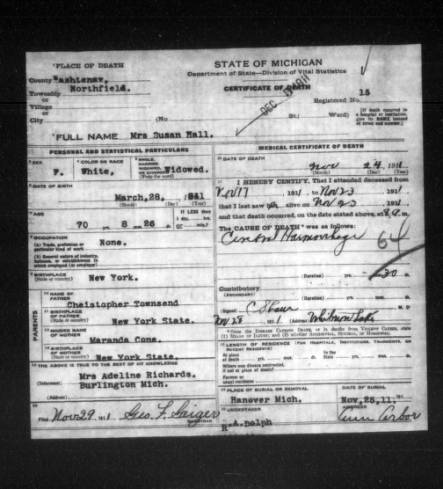 Can you help me determine for sure the parents of Christopher Townsend?

In the hopes that I might discover what happened to Darius Townsend, I hired a private researcher to go into the Carded Medical Records in Record Group 94 at the National Archives. According to Darius’s Military Service file was in the Newport News, VA General Hospital on June 4, 1862 (on the muster roll as a nurse).

The results of the search are below. You will see his movements were:

May 22, 1862 he was admitted to USA (College) Hospital in Williamsburg, VA

Then we have a card for him that says he was admitted on October 30, 1862 at the Hampton USA General Hospital in Fort Monroe, VA and returned to duty on December 30, 1862.